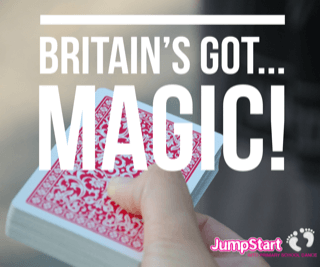 Last Sunday marked the series finale of Britain’s Got Talent (BGT).  Over the years we have seen the likes of Diversity and Lost Voice Guy gain success and fame through a show that attracts all kinds of acts (and I mean ALL KINDS: playing a tambourine with your face, having a relationship with a harp, making trumping noises with your hands).  Love it or hate it, BGT has become a staple feature of ITV’s broadcasting schedule and has now completed it’s 13th series.

What I found remarkable about this year was the amount of magicians auditioning.  A huge amount of magic acts made it through to the next round and in the final there was a total of 4 magicians (which is unprecedented as far as I’m aware).  In fact, magic has become so popular in the series that there seems to be a variety of different strands emerging…

All of this is a marked departure from the magic of my own childhood watching Paul Daniels and Debbie McGee on TV!

So why is it that magic has gained such mainstream popularity?  I’m sure in part it is due to the increasing exposure of ever more challenging and mysterious acts on shows like BGT.  But I like to think that it’s also down to us as a nation craving the unknown.

In our (western) world everything is now so immediate – the answer to most questions can be find with a tap and a swipe on an electronic device.  Which is great when you need to know certain types of information: what time the next train departs, how many millilitres are in a pint, finding a local cake decorator for a party.

But is this age of information depriving us of some of our basic human needs?

A certain level of mystery is surely healthy (and I would argue necessary).  Intrigue drives us forward and compels us to investigate, to ponder, and most importantly use our imaginations…

How did all those dancers fit into a tiny box?  How did 4MG know that Simon Cowell was going to choose Stavros Flatley?  And how on earth did Ben Hart transform a piece of confetti into an egg right in front of our eyes?!?  (To witness this amazing feat, watch the clip below)

Les Lancaster, a professor of transpersonal psychology, says ‘A sense of mystery is intrinsic to the human mind…It’s intrinsic for us to seek answers.  It’s our evolutionary heritage, moving us forward by motivating us to find out more and use our imagination.’

And Ben Hart, in his final magic performance on BGT, echos these sentiments ‘In order for me to share [the magic story] with you, you’d have thought I’d need big Hollywood special effects.  But it turns out all I will require is your imaginations’.

A quick search about BGT magicians on google reveals numerous websites claiming to expose the secrets behind the acts.  I for one, will not be reading them.  I’d rather remain in the dark and delight in the not-knowing and the mystery of it all.  Because that’s really where the magic is at.

Over the course of the last few weeks, we’ve been blogging about wellbeing and the…