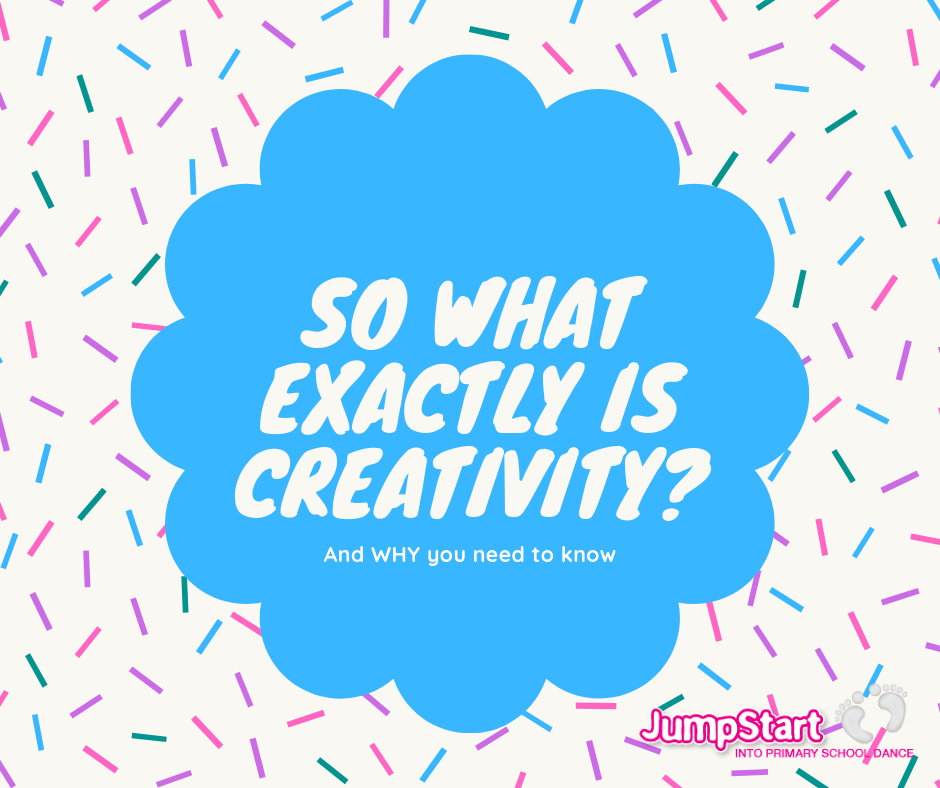 If you have been following our blog, or have worked with JumpStart, you’ll already know we’re big fans of creativity.  In fact, it is at the heart of what we do in our creative dance practice: our unique blend of dance for children always includes a combination of improvisation tasks, developing movement from a range of starting points and choreographic activities.  And when asked what they have most enjoyed, children will almost always say ‘the part where we could make up our own dance moves’.

But when we refer to the term ‘creativity’ what do we actually mean?

In short, it’s the act of making something new, which could be in any medium such as movement, visual art, sculpture, textiles, photography, music and so on.  And I guess the impetus for this creation comes from a need to express a notion / idea / feeling / instinct.  The fantastic thing about creativity is that there is no ONE right way – there are numerous possibilities – which is what makes it so exciting!

Why is it important?

Humans beings have always had a desire to create, which has often led to invention (the wheel, paper, the internet), but it is also sometimes art for it’s own sake (my personal favourites currently being: the architecture designed by Gaudi (inspired by my recent trip to Barcelona), anything by Tokio Myers (of Britain’s Got Talent fame) and of course Game of Thrones (John Snow…say no more!)).

And it’s not just about becoming the next Ashley Banjo or Amadeus Mozart, but about reaching our full potential: “Expressing thoughts and feelings through art is important throughout childhood and in helping children develop into accomplished adults” (Crayola: Power of Creativity).

Creativity is a means of self-expression – allowing us to share what we may not be able to articulate in words.  It helps us to know ourselves and discover what we can achieve.  It provides an outlet for hidden and/or painful emotions and allows us to accept ourselves for who we are.  Not surprisingly then, creativity in any form is a positive way to support our mental health in both children and adults.  To read more about the mental health benefits of dance, check out our blog post here.

The fantastic thing about being creative is that is also brings connection – to ourselves, to those around us and to our community.  I’ve been watching Ashley Banjo’s Big Town Dance over the summer holidays (having missed the original screening back in 2014) and what has really struck me is how much the project brought together the people of Stockton – the expelled pupil and the deputy head, the local businesses, and people of all ages, abilities and backgrounds.  Did you miss the series too?  Here’s some of the highlights…

And creativity is becoming increasingly important in an technological future.  The BBC reported last year that “new technologies threaten around two-thirds of jobs in the developing world”.  But the jobs that will most likely survive will be those in the arts.  Alice Bonasio, writing in Quartz about Nesta’s recent report, commented that in the future “creative jobs will be much more resistant to automation”.

This fantastic video of Sir Ken Robinson futher promotes the case for creativity – this time in schools. And it seems it’s not just us that feel inspired by his TED talk, as over 15 million people have watched the clip since it was aired online.

Coming next week in our series on creativity: ‘Can creativity be learned?’

Over the course of the last few weeks, we’ve been blogging about wellbeing and the…

Last Sunday marked the series finale of Britain's Got Talent (BGT).  Over the years we…