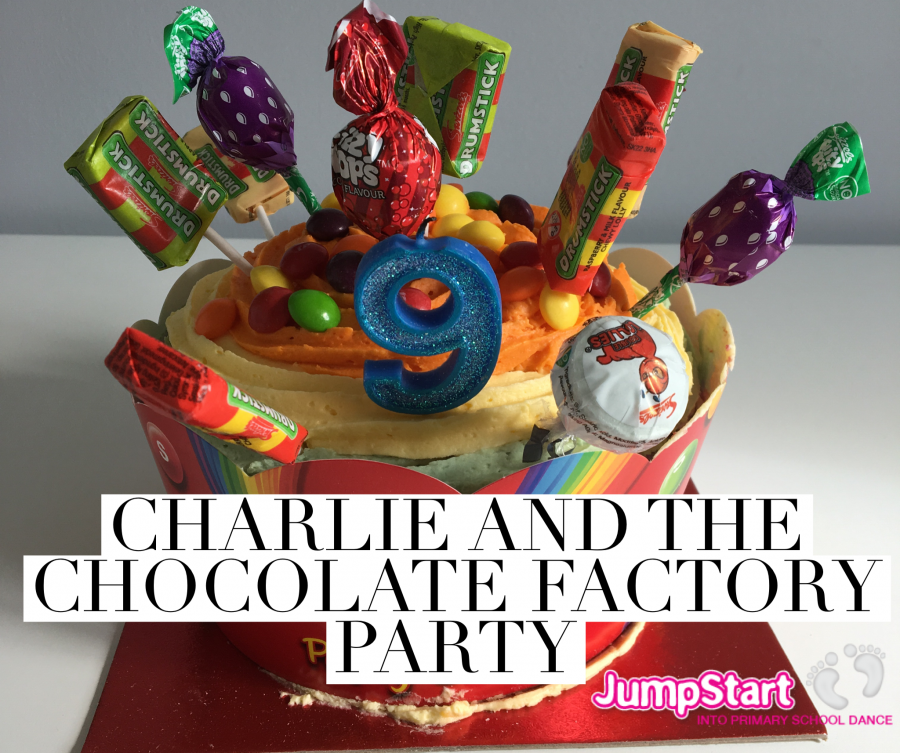 An insight into my own family homemade parties…they’re fun, simple, cheap and most of all CREATIVE!  Follow our adventures, try out ideas yourself or invite us to run one for your own kids.

This is one of my favourite books. Ever. There is something wonderful about the the magic of the Chocolate Factory and the adventures that Charlie Bucket and the other children go on with Willy Wonka.  Fortunately for me, my daughter loves it too.  But she declared a few weeks before her birthday that she would like a party based on this classic book.  Beyond the idea of having lots of sweets, I wasn’t sure of any actual activities that we could do.  There is an amazing array of food and decoration ideas on Pinterest but I was lacking inspiration on games that our guests could play.

I decided to re-read the story to spur my imagination.

And this is what we came up with…

My daughter designed and made her own version of the golden tickets (a cardboard wrapper with a ticket enclosed inside).  Staying true to the story, I hid the golden tickets around our house (and wrote one person’s name on the back of each one) and the children had to search for their OWN ticket.

We used the lounge as the chocolate factory.  Keeping it simple (and low cost) I simply made a sign for the door: 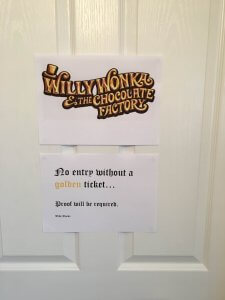 Once the children had all found their tickets, they had to sign a contract before entering the factory, again using ideas from the original book: 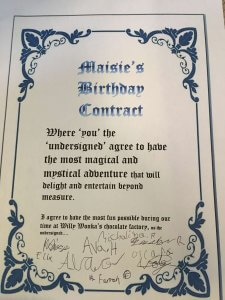 The rest of the party focused on some of the exciting rooms out of the story.  We did…

The Chocolate Room.  Everyone’s favourite room (well, it’s definitely mine!).  To keep with the theme, we decided to play what we refer to as ‘The Chocolate Game’.  There’s probably a proper name for it, but this is how we play it… 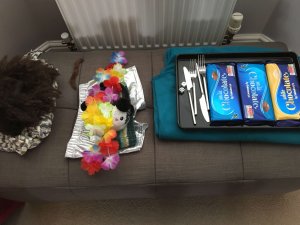 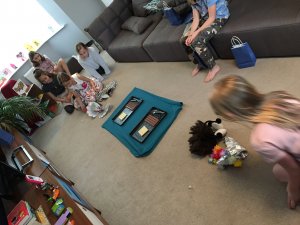 The kids LOVE this game – it’s a brilliant mixture of excitement and reward!

The Nut Room. This is where Verruca Salt demands to own one of the squirrels that are sorting through the factory nuts.  As with most of the other children she gets her comeuppance for being disobedient; on this occasion by being thrown down the nut chute.  For this game, I put a sign on a bucket saying ‘bad nuts’ and gave the kids a pile of balls.  They took it in turns to throw these balls (or bad nuts!) into the bucket. 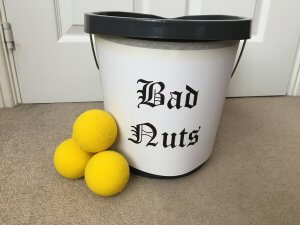 Every time they were successful, they won a reward from the sweet stand my daughter made for her party: 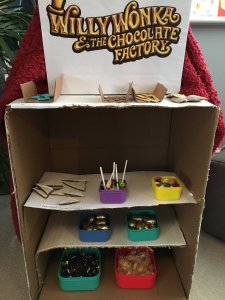 Wonka Vision Studio.  In the studio, Mike Teevee gets transported through the air into Wonka TV.  We decided to play a very simple game involving commands that can be found on a TV remote…

The idea was to complete these commands as quickly as possible – the slowest person to do each one had to sit out (after choosing a small treat from the sweet stand).  The winner was the only one left!  They got to choose a larger prize from the stand.  This game was fun, simple and very quick to do.  It was hilarious hearing them speak in gibberish too and there was a lot of laughter.

Inventing Room.  This is the place where Willy Wonka develops his latest zany ideas for his new products.  I thought it would be a great idea to ask the party goers to create their OWN treats.  I gave each pair a pen and a piece of paper to jot down their creations including: the name of the sweet, what’s special about it and the ingredients.  To present their new product, I asked them to create a (very short) performance that describes it through movement.

Well, the kids absolutely LOVED this!  In fact they liked it so much they could have spent HOURS on their designs!  Here’s a few of their ideas…

Interspersed throughout the party, I also played the oompa loompa music from the film of the book.  Every time the children heard it, they had to dance like an oompa loompa to win extra prizes. This was also extremely funny and they came up with all sorts of ways to move!

All the prizes from the games were saved and then used as the contents of their party bags.

We had a huge amount of fun doing this party!  Let us know if you try any of them out yourselves.

Over this summer holiday we’ll be running a Roald Dahl Dance Workshop for 7-11 year olds.  So if you’re local to Syston,this may be for you!    We’ll be trying out some of the moves from Matilda The Musical, plus some of the author’s other amazing books.  The day will finish with a performance to share our new skills.  Click on the flyer below for more details and how to book. 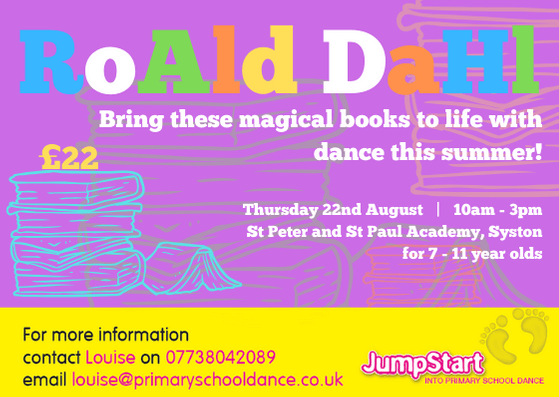 And if you’d like to host your own JumpStart Dance party, please contact us by calling 07738042089 or email [email protected]

An insight into my own family homemade parties...they're fun, simple, cheap and most of all…